The Question of the audience is whether it is real that the evil of Michael will die in this movie or not? Because in Halloween 2018 Michael survived. Similarly, in the Halloween kills, the people of Haddonfield try to kill Michael but they fail to kill him.

Also the title of the Movie has the word ENDS in it so it gave a little hint to people that in this time something good will happen. Well, the answer to this is yes… Michael will die in the Halloween kills. But how? For this continue reading the entire article.

Jamie Lee Curtis played the role of Laurie Strode as she had also played the role in previous parts of Halloweens series. She survived the Michael Myers killing spree of 1978. Laurie was also the grandmother of Allyson.

Andi Matichak-played the role of Allyson, the granddaughter of Laurie and daughter of Karen.

Will Patton played the role of Deputy Frank Hawkins, he is a sheriff’s deputy also he arrested Michael’s Initial Killing spree in 1978.

Kyle Richard played the role of Lindsey Wallace, the children Laurie babysat in 1978 and she also survived an encounter with Michael in 2018.

Rohan Campbell-as Corey Cunningham, he was accused of murdering a child whom he was babysitting.

Nick Castle-provides voice over to Myers’s breathing and an unrelated cameo appearance in the party scene. He played the original role of Michael Myers in the 1978 film.

James Jude Courtney-as Michael Myers, the masked figure, he is the main character of the film, he had a horrific killing spree in 1978, then after escaping from prison after 40 years of being kept, he again murdered people in haddonfield in 2018.

The film released in 2022 in the month of October. And on 14 October 2022 in the United States by Universal Pictures.

The running time of the film is approximately 1 hour and 51 minutes. 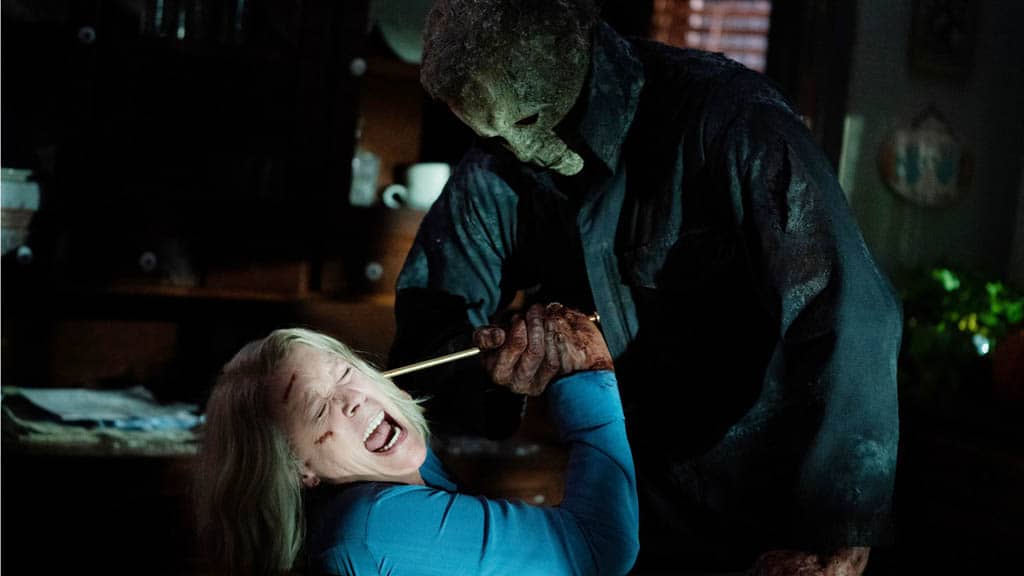 “Evil Dies Tonight” the Story Behind it

Michael is like a violent wolf in the Halloween series. And all the victims are like goats, which all are killed by him.

In the series of films every time after Michael survived, Now in Halloween kills when it was promised that Evil would die Tonight but this time he also vanished from the scene and left everyone fearful. In the finale, Halloween Ends the time of Evil Dies is near.

The message given in Halloween kills was ” Evil Dies Tonight” gave the plot for Halloween ends.

As Laurie strode survived the killing spree of Michael from 1978. He waited 40 years for the return of Michael and had done a lot of preparations for killing Michael. She also trained her daughter to be a fighter against Michael. In the first attack after Michael escaped from prison, he killed many people but Laurie, her daughter, and granddaughter survived.

In the next sequel, Halloween kills Michael kills Karen in the closing moments of the film. Then Laurie and her granddaughter decided to live together for the rest of their lives. Suddenly, things started getting worse because the lover of Allyson, Corey Cunningham who was accused of killing a baby boy, a horror came into the entire town.

This was a fascinating point as they first told the story of Corey in the start and then connected to Allyson. The resolution of making Corey the main character along with Micheal is a very captivating thing. Because all other story was already knew that Michael would come back for strode and there must be a fight between them, but Corey being infected by Michael evil and starting killing people was a new interesting thing.

Corey started a killing spree. Laurie suspected Corey. Many thriller scenes occur, much horror and suspense. Corey stabbed himself with a knife before arriving at Allyson to make her show that Laurie killed her.

In the end, Laurie and Allyson killed Michael for sure now. Laurie stabbed him and managed to slit his throat. Allyson sliced his wrist. They took the body of Michael to the salvage yard and gathered the residents of Haddonfield. And disposed of him in an industrial shredder. At the end of the film Laurie ended her memoir and formed a pair with Deputy Hawkins while Allyson left Haddonfield.

GTA 6 and Bully 2 are possibly in Development at Rockstar!