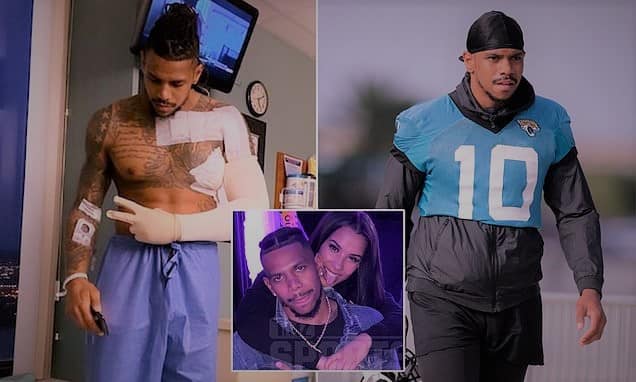 Former NFL player Terrelle Pryor revealed the stab wounds after being attacked by his girlfriend at their apartment; the apartment is located in the Pittsburgh area. Pryor shared a picture on Instagram and showed the 30 staples he needed to close the expensive scar on his chest and shoulders.

He claimed in a previous post; he needed to be resuscitated before emergency surgery.
Pryor faced the charge of assault and was expected to make a full recovery. His girlfriend’s name is Shalaya Briston, who was accused of stabbing Terrelle Pryor during the physical altercation on 30th November.

According to the police, they both are believed to be mutual combatants in this incident.
According to Pittsburgh Post Gazette, she has been charged with criminal homicide and aggravated assault. She will be forced to wear an electronic ankle monitor when she was released to her mother’s home.

Pryor wrote on Instagram in December, “Life crazy man’ was coded twice before I came back alive. Stared death in the eyes in the same place my son was born; God is good and just got out ICU for 4 days.”

A post was released that features a picture of bare-chested Pryor sporting bandages over two areas. The police said the altercation took place at his apartment, and he was taken to the hospital by Briston and the other two witnesses.

Court documents state that a female witness claimed Pryor was fighting with Briston to return home from clubbing with friends. According to a witness, they tussled in their kitchen, and she allegedly grabbed an object and stabbed the former NFL player.

Briston’s attorney claimed that she was the victim of domestic violence, and the court was guilty of a miscarriage of justice for keeping her locked up. The attorney defended her as when a man puts his hands on a woman, and she is in fear, then she has a right to defend herself; that’s why the lady acted in that way.

On social media, a video was viral in which Pryor was saying goodbye to nursing staff.
At that time, a nurse named Seeya Mina was heard saying that, “ Patty bye, come visit me, come visit me upstairs, Thank y’all, Man.”

Terrelle Pryor had spent time with nine NFL teams in which New York Jets, Buffalo Bills, Cleveland Browns, and Washington Redskins are included. The couple’s relationship was described as volatile, and TMZ said that he is always putting his hands on Ms. Briston.

Pryor was arrested and faced a charge of assault following a dispute in his apartment on Heinz Street. Recently he signed with Jacksonville in September after a hamstring injury. He was a national star in school and college.