For the record, I only watched the first season, not any of the 2nd yet, and it wasn’t attractive to me from the outside.

I thought it was the typical crime story mixed with the specific school drama; the thing is, it’s not something out of the ordinary, but it’s very good at being that.

So much so that it was the most-watched series on Netflix for months. Moreover, it is the 2nd Spanish hit on the platform after La Casa de Papel (Money Heist).

***There will be spoilers about the setting of the plots, not the big story itself***

Élite means “elite” in Spanish, as is evident. Before the story starts, three teenagers had been left out of their school because the building went down, so the construction company grants scholarships to an expensive private school to 3 random students of that school.

This expensive school is called Las Encinas (the school is filmed at a private university in Madrid located in the town of Villaviciosa). The fictional village is a mixture of Guadarrama and El Escorial, also two small towns of the province of Madrid to the northwest. 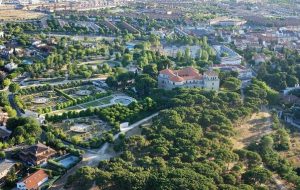 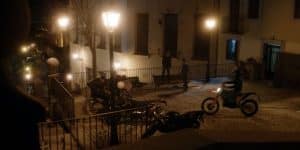 The above are scenes from the series filmed in Guadarrama and El Escorial near the mountains of Madrid.

In any case, Las Encinas School is full of rich kids who have established their own internal rules within the class and despise the new low-income students. The singularities of those three students do not help it: 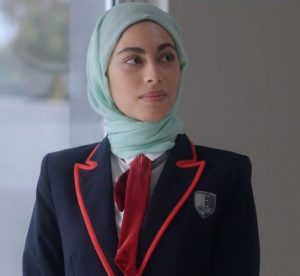 She is a Muslim immigrant with rigorous parents, an outstanding student who works in her parents’ shop and whose brother, Omar Shana, is a drug dealer. 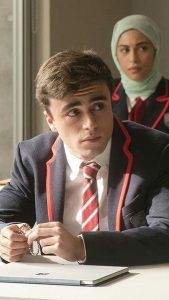 He is a well-intentioned guy, quite shy, and a good student with a brother who barely got out of jail, Fernando, and no father. They live with their mother. 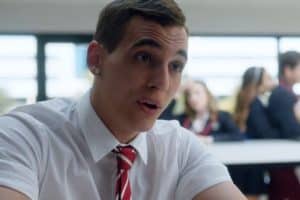 They arrive at the class in which they find these others: 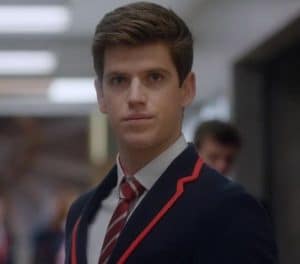 He is the most confident and outspoken of the rich boys in the class. He is the beloved son of the proprietor of the construction company. He is the brother of Marina and the boyfriend of Lucrecia.

Deep down, he has good intentions and shows care for those he loves, but on the outside, he’s pretty much an asshole trying to please his father. 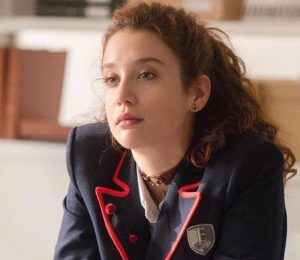 She is the sister of Guzmán, the daughter of the construction company owner. She is rich but also quite a rebel, unlike her brother. She makes friends with the new ones very quickly, takes drugs, and had past problems with her boyfriends.

She is a rich Mexican girl studying in Spain. Her parents are diplomats who work between Mexico and Spain.

She is the girlfriend of Guzmán and the most intelligent girl in the class. She hates the new Muslim girl firstly because she takes away her place as the smart one in the class and secondly because she shows some pretty xenophobic behavior.

She is the daughter of a Spanish noble (her mother) who owns extensive vineyards and properties all over Spain, and her father is the owner of another company that works with the construction one. She is known as la Marquesa, “the marquise”, which is her noble title. She used to be Marina’s best friend, but since her friend started to behave that way, they have lost their closeness. She is Polo’s girlfriend; they have been together since they were twelve, and their families act as if they are married already. She is very clever and knows how to be what’s expected of her and defend her interests, but she also feels a lot of excitement in stepping out of her carefully designed path in life.

His surname is never mentioned. Polo is the son of 2 homosexual mothers who have very successful businesses in the press sector and modeling. His family is wealthy, but unlike the others, they are far more open to anything. That doesn’t mean they are a loving family, his mothers are just as absent from his life, and they constantly judge him for not having initiative and charisma compared to anyone of his friends. They are more open about whatever he likes or wants in their life, though. Polo is a very close friend of Guzmán and Ander. 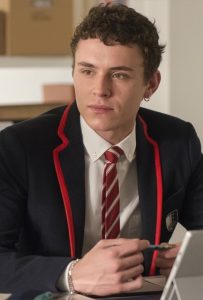 Ander is the son of the headmaster (his mother). He is not rich and is the only one who can fit into the so-called middle class of the series. His friends are rich, though, because of the school he attends.

Moreover, he is the sports guy in the class, a professional tennis player who competes nationally, but he doesn’t like tennis as he used to. He keeps playing it because his father pushes him. He is the best friend of Guzmán and Polo, the rich boys in the class are far friendlier to each other than the girls who merely pose as friends. Ander is also gay but still not out of the closet. He is secretly using a dating app for gays when the series starts.

When the new students arrive, they clash with how these other guys have been “running the place”. Cristian, the silly, loud one, first has problems with Guzmán and Lucrecia after he tries to flirt with her. The Muslim girl Nadia has problems with Lucrecia. She sees her as a threat. Moreover, she tries to push her out of the school using her religion against her. 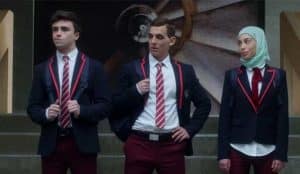 Meanwhile, Samuel gets on well with Marina, the rich rebel girl, but unfortunately for him, his romance with her is pretty short-lived, as Marina prefers his criminal brother over him. Cristian gets close to Ander, though, and takes him into the world of drugs and parties unknown to him due to his strict father. It’s precisely from Cristian that Ander will meet with Nadia’s brother Omar.

He is the brother of Nadia, obviously from the same Muslim family with a strict father, but he is a far worse student than his sister. He is a good friend of both Samuel and Cristian from their previous school. He is a drug dealer in secret, and he sells to Cristian, but not only is he a drug dealer, but he is also gay in secret, which is far worse because his father considers it an abomination.

Ander will, by accident, find out that Omar is gay on the dating app, and they will start to have passionate encounters in secret, despite almost being in denial about it for quite some time. 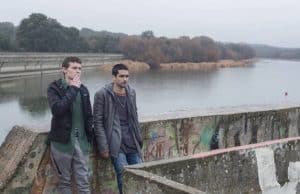 At the same time, Cristian’s apparent cluelessness catches the attention of the clever Carla and her boyfriend Polo, who are eager for new experiences in their boring perfect life. They will trick Cristian into thinking Carla likes him more than Polo so they can start a series of sex games with him. 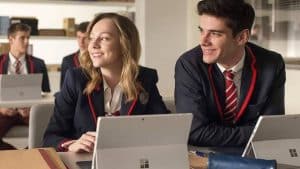 All these plots will merge and interact between them. However, ending with the assassination of Marina on the 1st of June at the party before the summer vacation. The first thing you see in the series is the moment Samuel shows up covered in blood to see Marina’s body next to the police. After that, you will see things develop in many directions, showing flash-forwards to the interrogations and flashbacks to the story itself until the very last minute when you find out who of them the killer is and their motives.