The Most Famous Dog Paintings Through the Art History

Dogs are everywhere, and we love them! But occasionally, we may wonder if this has always been the case. Have our beloved canines been our closest companions from the dawn of humankind? The answer is yes! And the paintings of history are testimony of this. These furry friends have always been dear to us.

Dogs have been shown as being man’s closest friend in many stories, novels, songs, and works of art throughout human history. In ancient tombs and caves, there are pictures of dogs illustrating the incredible bond between man and his canine companion. Even the most renowned painters, such as Pablo Picasso and Frida Kahlo, could not resist the allure of canine companionship and painted them in their paintings.

If you adore puppies as much as we do and would like to add a dog painting to your house, we have compiled a list of five of the most renowned dog paintings in art history.

Regarding famous art with dogs, C.M. Coolidge’s “Dogs Playing Poker” is the most well-known. However, this painting series is Coolidge’s most iconic and noteworthy artwork.

It is important to note that Dogs Playing Poker does not refer to a single painting. In actuality, it is the title of a series of 18 paintings of dogs by the artist. In 1903, Brown and Bigelow’s publishing house commissioned this series to market cigars.

All 18 paintings depict amusing, humanized dogs in various humanistic situations, such as smoking cigars, drinking beer, on a road trip, and playing poker, football, and baseball. However, only eleven of these 18 paintings portray poker-faced dogs playing cards around a table.

The Dogs Playing Poker series is the most well-known artwork due to its incorporation into popular culture. These paintings have been featured in various art publications, books, films, television series, and art exhibitions since their conception.

The Hay Wain is undoubtedly the most well-known and one of the most famous dog paintings by the English painter John Constable. The oil painting depicts two black horses carrying a hay wagon through shallow water. A few only indicate the white metal rims of the wheels. The journey’s destination is visible in the back right corner of the field. Workers are busy mowing and loading hay.

Old farmer Willy Lot, after whom the left cottage was named, must have been alive at the time of creation. The cottage appears in another painting by the artist. However, it is only a minor character in this artwork.

A lady, not he, exits the cottage to collect water. On the vertical below, a little puppy attracts the viewer’s attention to the hay wagon. Constable added the dog towards the conclusion of the painting process. In addition, he offers compositional balance to the hay cart.

Edmund Henry was born in Hildesheim, Germany, in 1858. To learn painting, he attended lessons at the Royal Academy of Arts. He was influenced by several prominent painters of his period, who taught him diverse painting styles and methods.

Edmund Henry is renowned for depicting rough landscapes and hunting dogs in paintings. His artwork “Hunting Dogs” depicts three dogs standing alertly and awaiting the hunt. Edmund Henry skillfully painted the three hunting dogs to convey their innate affinity for the hunt. The painting is so precise that each dog appears to have a separate personality.

Edmund Henry was both an athlete and an artist. He enjoyed dogs and birds. The majority of his creative work focuses on dogs, particularly hunting dogs. He is undoubtedly the most famous dog-painting artist. 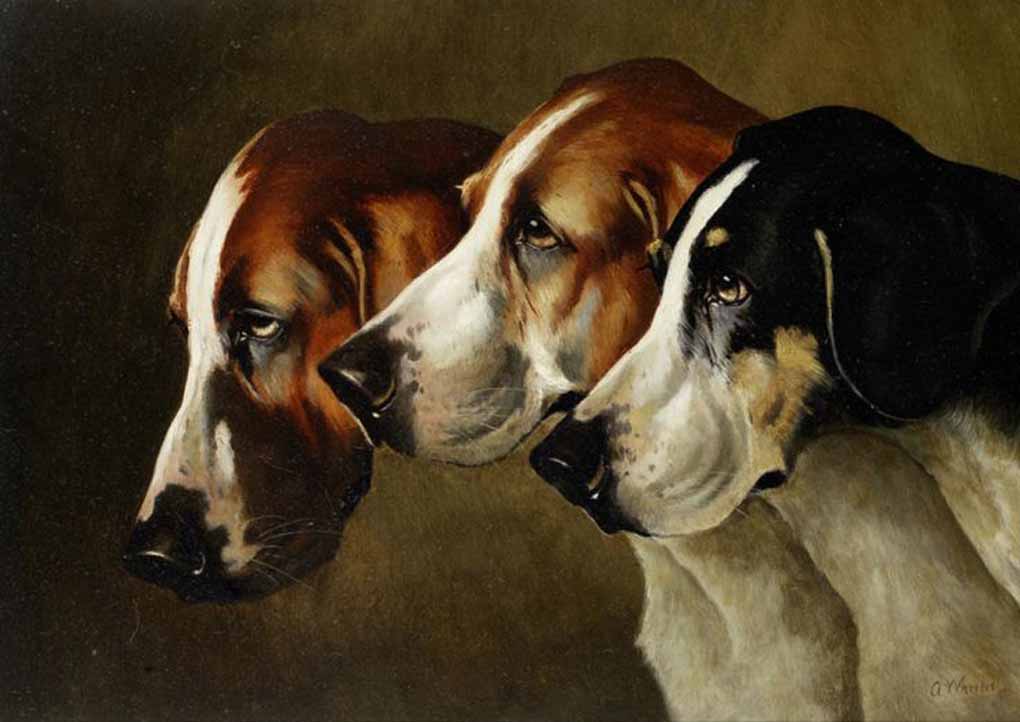 Dogs in a Boat by Winslow Homer

Homer composed several works influenced by the outdoor activities and landscape around the North Woods Club in the Adirondack Mountains. This painting is one of several hunting targets. Five dogs are crammed inside a boat, maybe awaiting order or enjoying a rest after deer hunting.

The dogs seen in the artwork waiting in a boat seem to have the training to find and drive deep into the water, where they would finally weaken and drown. Over graphite on paper, Homer utilized sponging and scraping to create this watercolor painting. Homer employed numerous layers of russets, browns, and greens to illustrate the fall trees and thinner layers to depict light bouncing off the boat. Finally, the artist created the virtuosic reflection on the water by scraping and repainting.

He sponged out a figure on the opposite side of the boat, perhaps a human, and puddled the dogs’ coats. Again, the painting displays Homer’s fully developed technical abilities.

Charles Burton Barber was an English artist from 1845 until 1894. This work typifies the kind of painting he is most known for portraits of youngsters with their pets.

In this 1894 painting, a little blonde girl with blue eyes recites the grace before her meal. A chair is next to her bed. Her dog Jack Russell Terrier has discovered the ideal position to observe the egg and toast on the young girl’s breakfast tray.

A little tabby kitty sits on the other side of the praying youngster, partially beneath the bedsheets and peering at the food. The cat and the dog wish to share dinner with their little mistress. Barber depicts this moment of suspense and expectation.

Does the child share with her animals? Or does she kick them both from the bed once she has finished praying? It is possible that the artist created the suspense to be made into commercial prints.

Dogs have played a significant role in art, painting, sculpture, and other forms of expression. Our four-legged canine companions have considerably affected art history, and dog paintings are essential in the art world.

All You Need To know about Daren Dukes and his life

How to Easily Acquire Free Credits in Rocket League Just by…